Commencing BCM300: Game Experience Design, we have been playing board games to consider the construction of the game and its effect on the players. Through this reflection, I’ll be looking at four games I’ve played during my class time. Each one will state information found online through the BoardGameGeek website and will have my own views on its mechanics, rules and setting. This will also include whether I think the game was successful or not and where I would improve it.

Rhino Hero is a board game that is designed so that players are taking turns building levels of a structure for the Rhino Hero to climb, situating it in Caillois(1961) category ilinx or Stewart Woods(2012) category of Space games. The objective is to not let the structure fall, not to have it fall on your turn or to be the first one to run out of cards. The game is set out with each player receiving ceiling cards which instruct you on how you have to place bent cardboard pieces.

I particularly enjoyed the game because we started competitively and strategically but further on, we played the more invested every player became in getting the structure as high as possible. We began to have the same goal as the Rhino Hero, to reach the tallest tower, this is why the game was so fun and how we became so enveloped in it

Sushi Go is a card game that utilises strategy but expressly relies on Caillois’s(1961) alea, the category of chance. Each player starts with an equal amount of random Sushi Go cards which have a different value depending on the quantity written in the corner of the card. Each turn, the player chooses one card from their hand and pass the rest of the cards to the player on their left. When there are no more cards left to be passed on, you reveal all selected cards and add up your points with the highest score winning.

Sushi Go was hard to fully understand initially, it took someone with experience to explain the game to us. It was very enjoyable and became increasingly fast-paced the more rounds the group played. The game embodies what is necessary for a game to be interesting as stated by Jeff Tidball (2017), the winner can always be usurped. It was a game that previously involved a lot of thought but is now my favourite to have played through. 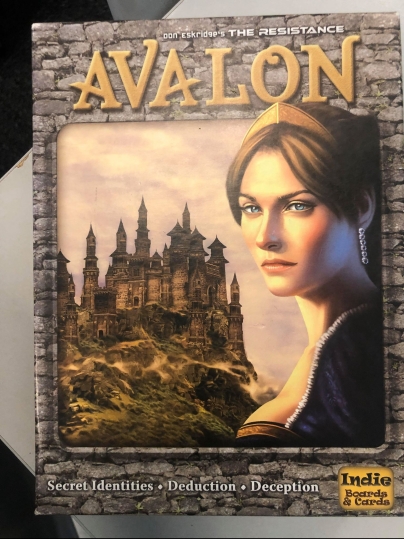 Avalon is a game of displacement based on Stewart Woods(2012) definition, as it relies on the quests being either a majority of successes or failures. This is done by players being randomly assigned a secret role as either a minion of Mordred or servant of Arthur. Each turn new teams get selected for quests and if the majority agrees the quest goes forward. If the quest continues, people secretly vote for the quest to succeed or fail and if there is one vote for failure the quest fails. The real trick of the game is that the minions of Mordred know of each other while the servants of Arthur have no idea of everyone’s alliance, except the player who was given the card of Merlin who knows everything about everyone. The only way for minions of Mordred to win if the majority of quests are successful is if they can identify Merlin and agree to kill him. 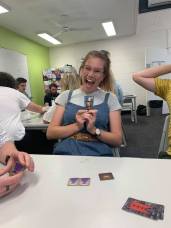 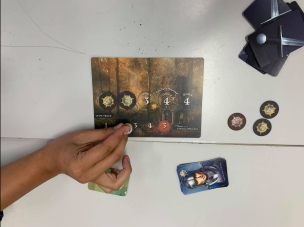 This game was so confusing as we relied on one person to explain the rules despite learning as he went. I had a look at the rules as we started and explained the Merlin rule, but there was still confusion. We played the first round of the game and the servants of Arthur almost won but a teammate (not mentioning names… but they’re depicted in the photo) of mine showed everyone her game card leading to the minions of Mordred to assassinate me since I was Merlin. The game was very intense and led to a lot of yelling, but it could be enjoyable as long as your team won. In my opinion, I do feel like it was set up so that it would be more likely for the minions of Mordred to win and it made it to challenging to be continuously motivated.

Ultimate Werewolf is a fairly simple game of elimination. It is Caillois’s(1961) game of mimicry and it involves a random assignment of either a werewolf, villager or seer. The point of the game is to either eliminate all the werewolves or to have the werewolves outnumber the villagers. This is done with a voting system where villagers and werewolves in disguise choose someone to be eliminated. Between rounds of elimination, everyone closes their eyes and the werewolves acknowledge each other, followed by the seer finding out if one player is a werewolf and then another round of elimination.

Ultimate Werewolf was similar to Avalon in the way that it was a game of displacement that led to distrust and yelling. We played with everyone in the classroom (estimated under 30) and even invented new rules where the werewolves would eat someone every time the villagers closed their eyes. I was eliminated second and the game became very boring until there was the moment of vindication, when the person who led the charge to kill me died. The game was able to keep me interested after that because everyone dead stopped caring about the no-talk rule and we bombarded the alive with noise. It was enjoyable but increasingly difficult the more players there were. 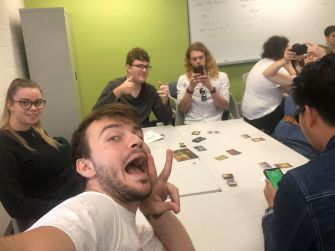 The primary mechanics in these games varied but often shared links. Like the random card distribution in Sushi Go, Avalon and Ultimate Werewolf or the working with enemies’ techniques necessary for Rhino Hero and Avalon. The essence of competition and the elements necessary to create suspense through story and the inability to confidential assume the winner is evident. The rules are malleable and the complexity of play made any player/team have a chance, despite how loud and intense the opposition was. I enjoyed all the games … even Avalon